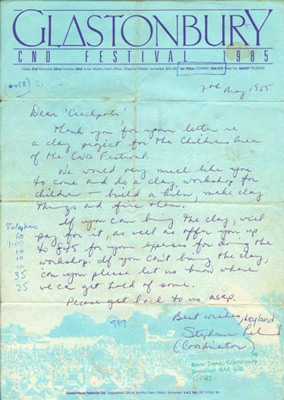 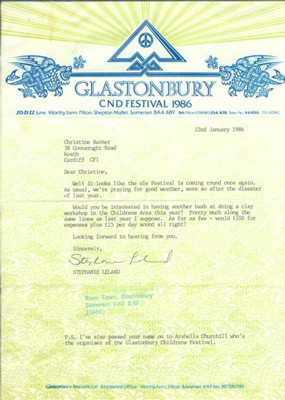 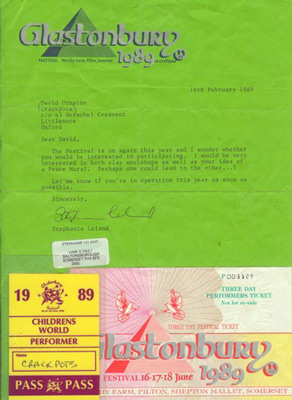 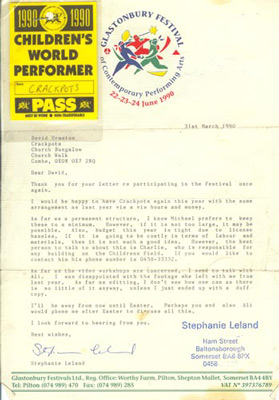 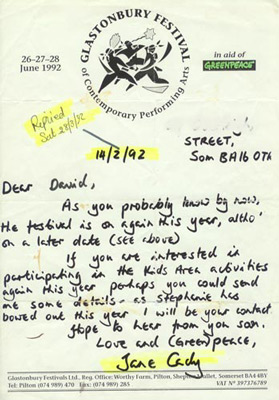 CrackpotsCAO first engagement in 1984 was conducted on a budget of £100 for materials. A crew of six carried out clay workshops in the Children’s Field over the three day event. Pieces which were dry enough, were fired Saturday night in a wood fired kiln that had been built using recycled fire bricks which had been salvaged from a disused brick works.

A marquee was provided by the Children's World organisers along with wood to fuel the kiln. About 200 ceramic pieces were made altogether, but only about 100 were fired due to the very limited time scale.  In spite of being one of the wettest festivals ever, CrackpotsCAO performance was so well received that we were invited to back to run clay workshops in the following years with increased budgets.

CrackpotsCAO has run clay workshops in the Children’s Field at every festival between 1984 and 1994 and here are some more photos from the Children's Field .. [9] 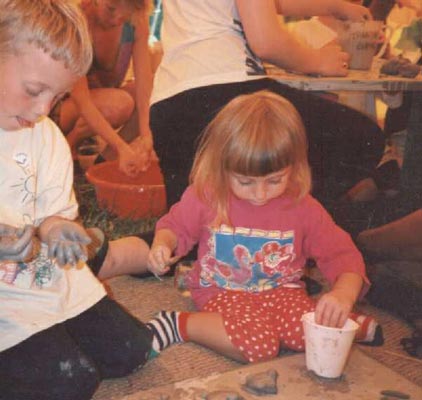 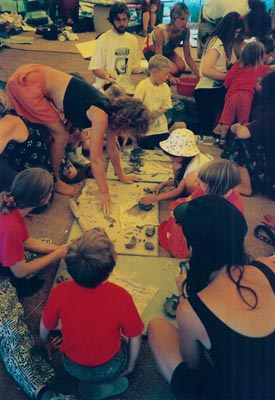 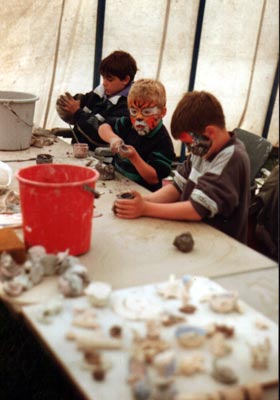 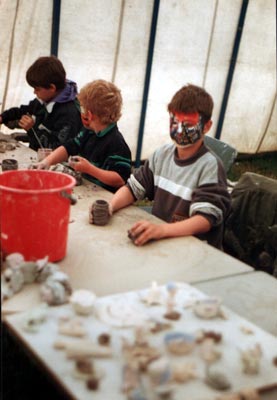 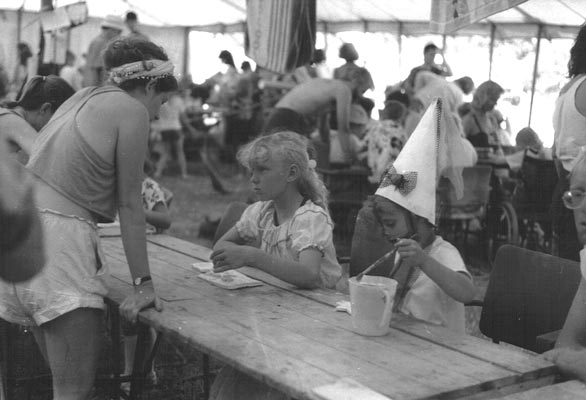 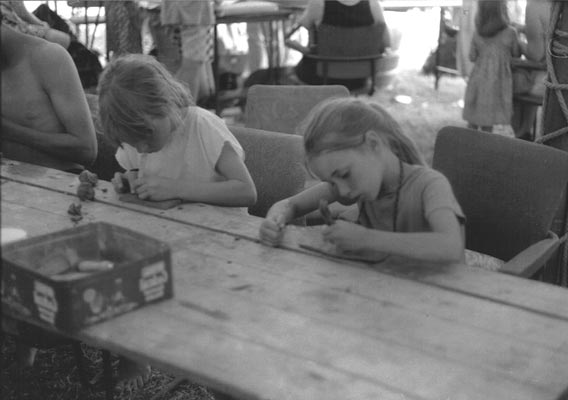 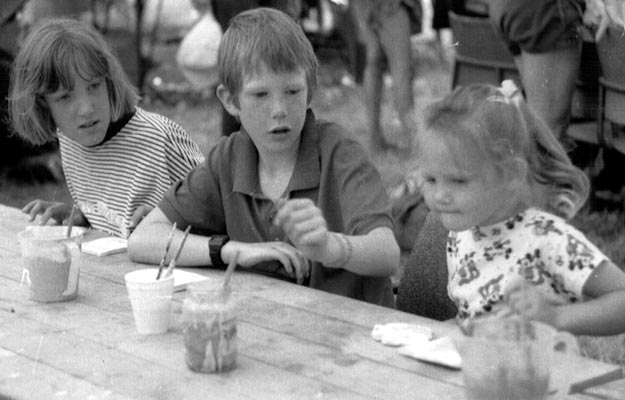 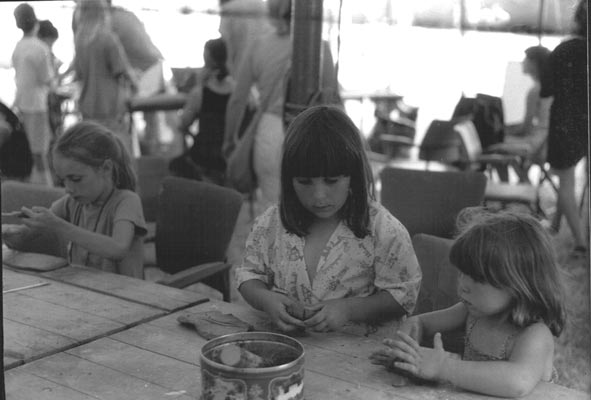 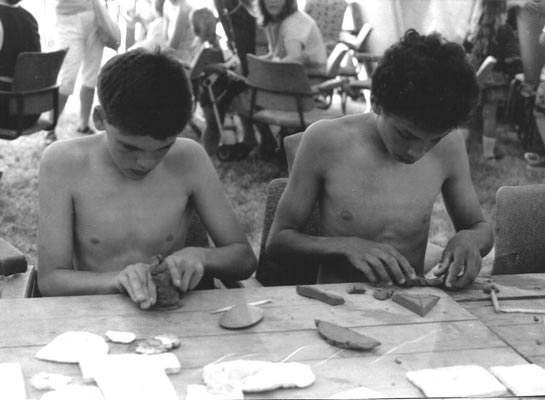 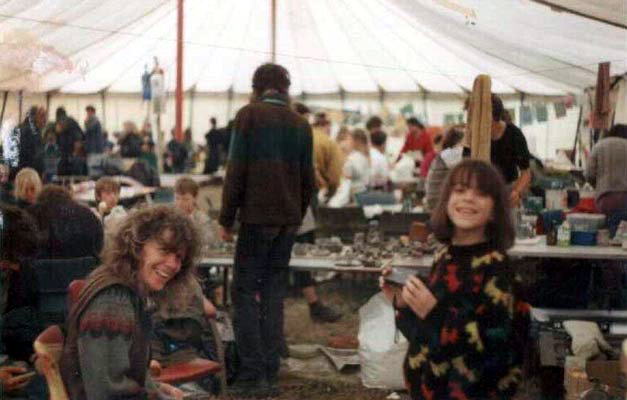 .  In 1992, Health and Safety regulations precluded the use of live fire kilns in the Children’s Field.  This aspect of our activities consequently became situated in the Green Crafts Field.  The new location 2 miles distant - on the other side of the festival site, presented the logistical problem of transporting the children’s work to the kiln for firing, and back again to the Children’s Field by Sunday lunchtime, ready to be taken home by the children.  About 500 pieces were fired in a double chambered, climbing bank kiln.  (kiln drawings [23]

This kiln was built with waste clay and fired with off cuts of Spruce, both of which were provided by the venue.  The budget for 1992 was £150 for materials, £1000 in wages and 25 tickets for the crew. Photos of the Green Field site, kiln and crew - [[25] 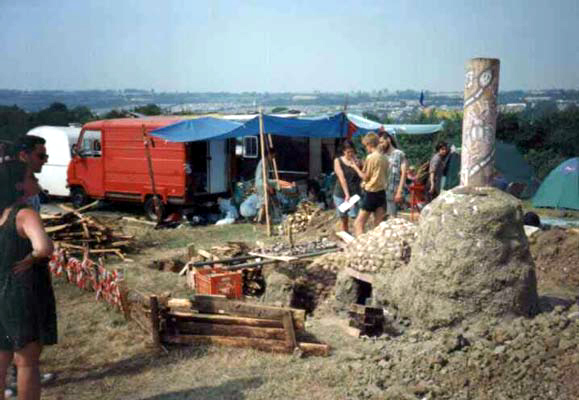 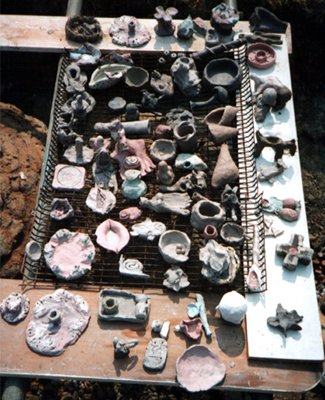 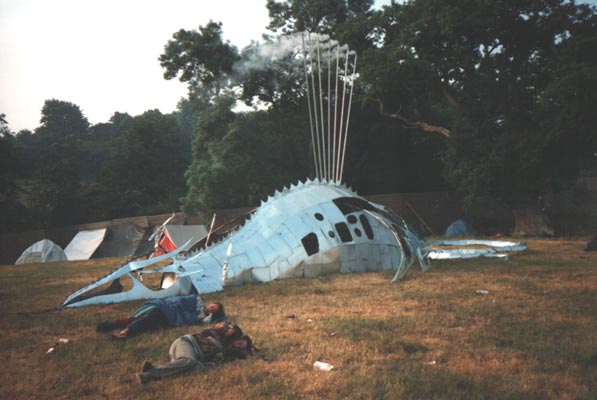 Children in the Green Crafts Field - [34] 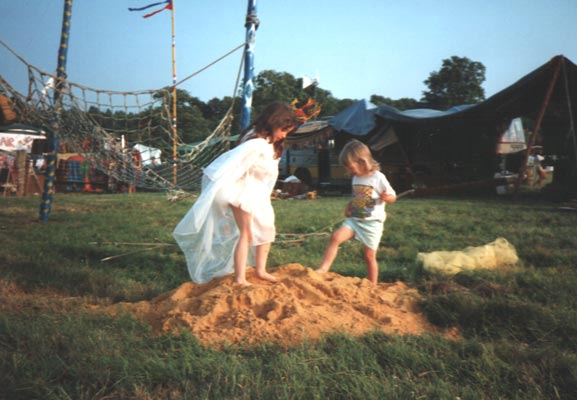 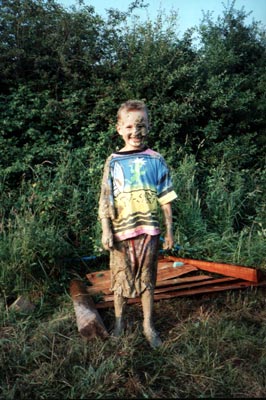 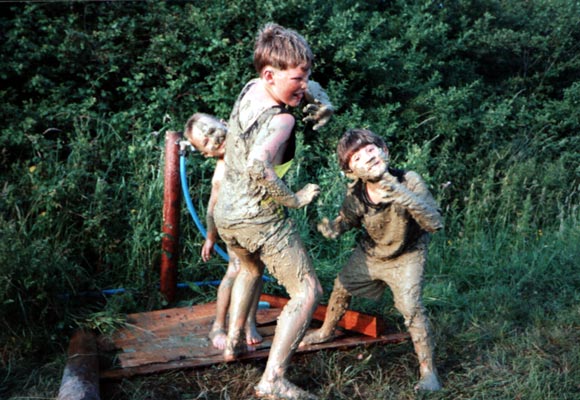 and the person responsible for all this fire and filth - [37] 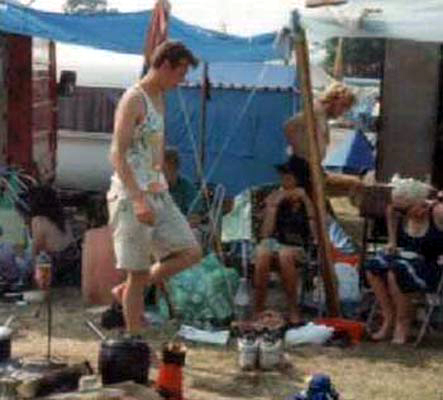 Alfazed in the crew quarters.

Each year, new types of kilns were constructed, and the number of fired pieces increased along with the numbers of people helping ie; the crew. 1994 was the last appearance of CrackpotsCAO at Glastonbury Festival. This project was directed by Gordon Clarke, who organised the clay workshops in the Children's Field and the kiln design, which we built in the Green Crafts Field. This was an experimental wood fired kiln named "Kiln Geezer" [38],   which successfully accomplished two firings over three days, in the process breaking many conventional expectations for kiln performance.

As for the future, CrackpotsCAO would very much like to perform again at Glastonbury Festival. We have plans for a " Kiln Geezer - Mark 2 ", which has far reaching implications as an Intermediate Technology solution to current high carbon emissions and deforestation resulting from inefficient ceramics production methods. At the same time, possessing the potential to increase productivity of ceramists in the developing world. The next step is to improve on the design a little and to take some detailed metrics concerning the volume of the kiln, the volume of wood consumed, the temperature reached and how long it was maintained. This data can then be used along with observations about the quality of the fired products to make some statements about the efficiency of this "Intermediary" design compared to traditional live fire kilns, such as are still in use today. Photos of kilns in Safi, Morocco [39] 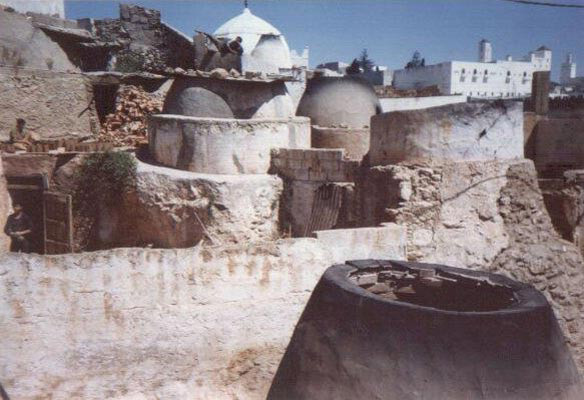 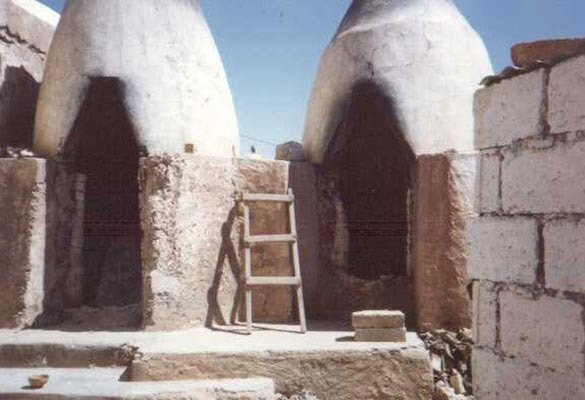 I am very grateful to Michael Evis, the organiser of Glastonbury Festivals and all his staff that we have worked with CrackpotsCAO, enabling us to use this venue for field trials of these kilns. This element of the festivals has been very important to CrackpotsCAO's development. This is particularly important, as finding a venue to conduct such kiln projects is not easy. Consequently, I am very grateful for having had these opportunities to develop my own knowledge as well as having lots of fun along the way. Thanks to all the other folks who have worked with CrackpotsCAO and the Glastonbury Festivals, helping us to get our act together.